It seems that the loudest voices in the crowd at the moment recommend that South Africans should take all their wealth offshore. Commentators can regularly be heard espousing the ‘fact’ that international equities have out-performed South African equities, and that it ‘makes no sense’ to invest in the local bourse.

It is true that investors have achieved diversification, as well as returns, by investing across the globe. Even though quantitative easing has reduced the degree of diversification between global financial equity markets, as well as the diversification opportunity between asset classes, we believe that this underlying principle still applies.

A question often asked is how much a local investor should have offshore. We have chosen to look at this slightly differently.

We have chosen to focus this question on equities – the asset class of choice over the longer term in preserving wealth for investors.

In unpacking this perception, let’s compare the historical returns of South African equities and the MSCI World Index, both in USD. We used mid-1995 as a starting point when the JSE Indices were reconfigured and the date from which total return data is available on the FTSE/JSE All Share Index (Alsi).

This is not a bad starting point as it’s close to 1994, the year of SA’s first democratic election. Subsequent to this South Africa experienced significant economic and social change. 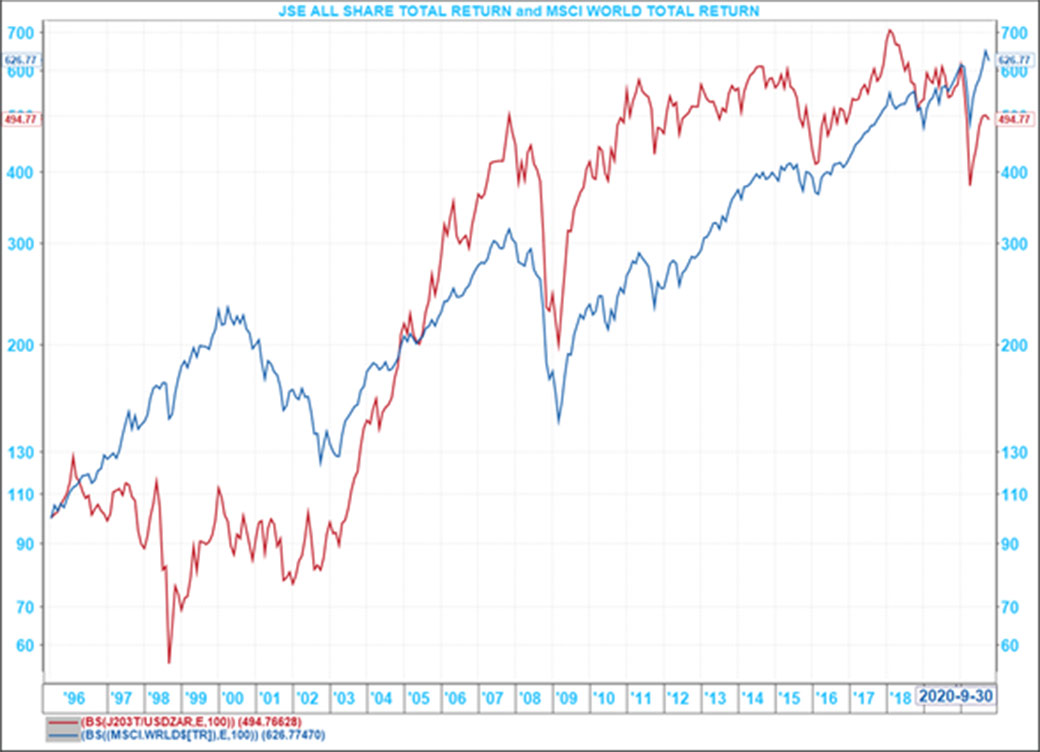 Based on the above chart, there appear to be a number of periods where the MSCI World Index outperforms the Alsi and vice versa.

The picture is simplified, however, when we plot the relative performance of these two indices, i.e. the JSE All Share Index divided by the MSCI World Index. When the line goes down the JSE is under-performing the MSCI, and when it goes up it is out-performing the MSCI: 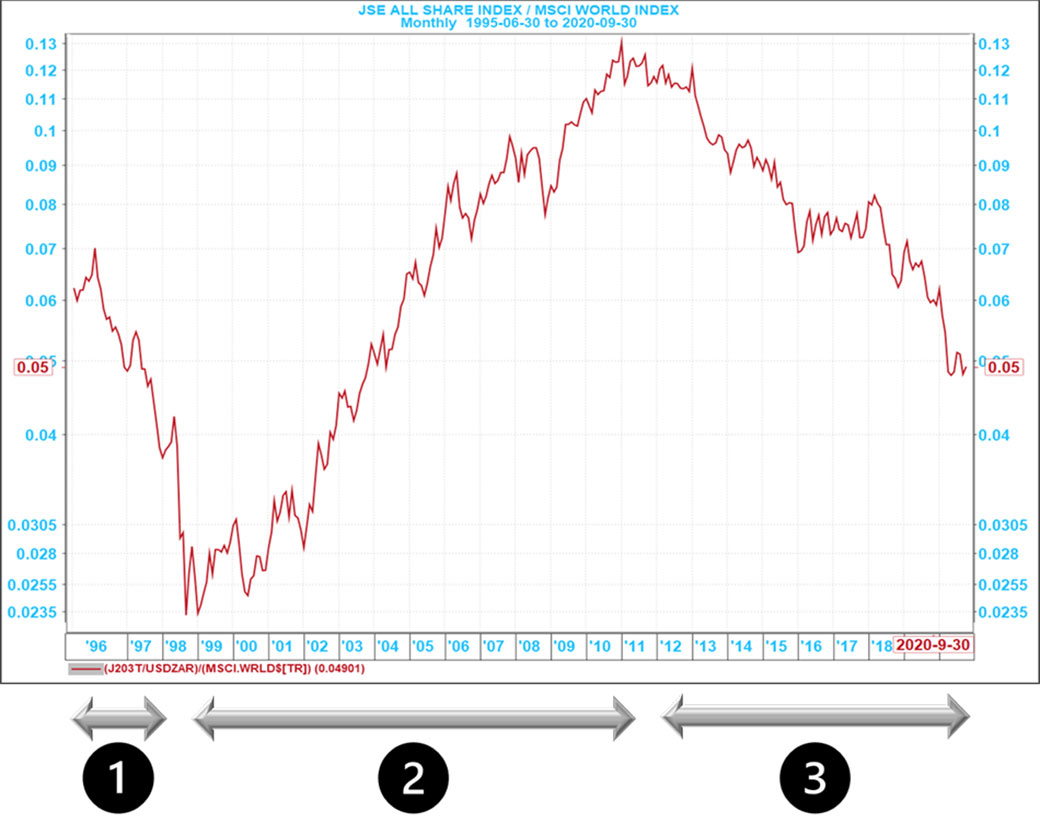 We have long contended that South Africa remains a commodity-based economy and, more importantly, that  the composition of the shares in the JSE All Share Index are significantly impacted by commodity prices and the stages of the commodity cycle.

With this in mind, we plotted this same chart but included the copper price: 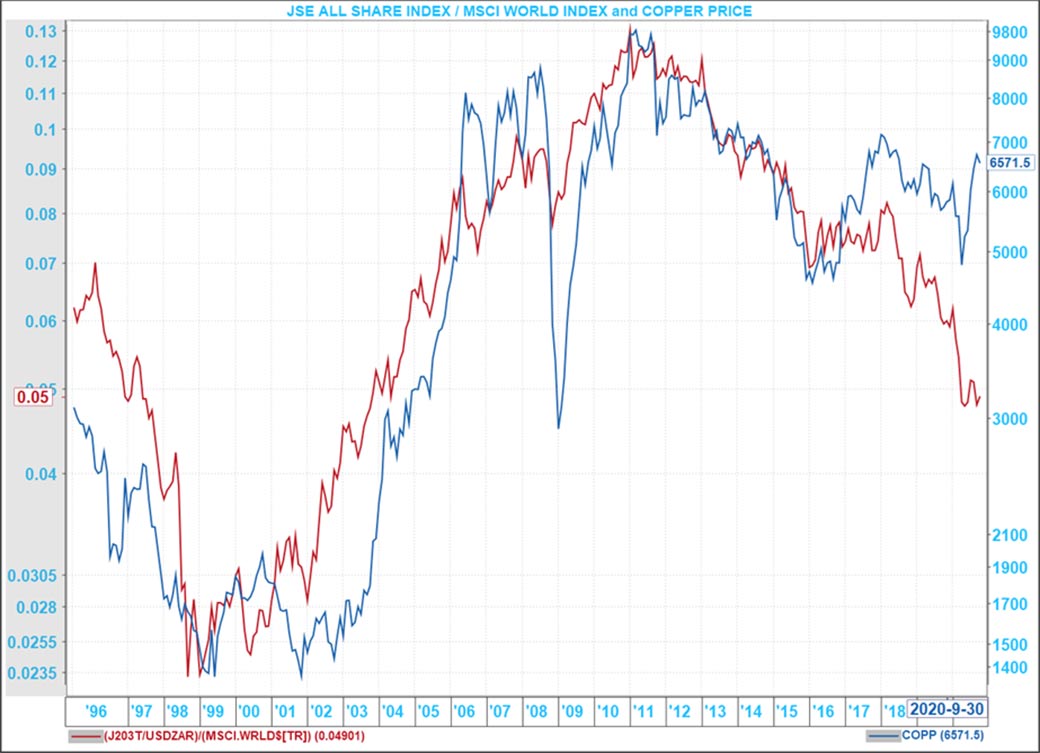 The visual correlation between the copper price (which we use to represent the commodity cycle) and the out-performance and under-performance of the Alsi relative to the MSCI World Index is quite striking.

While the necessary conditions for a commodity cycle boom are not currently in place, it is worth remembering that underlying conditions can change quickly should demand pick-up or if supply becomes constrained.

This suggests that there is a time to be in South African equities and we would strongly argue against the contention that South African investors must be fully invested offshore at any cost.

Investors must remember that the rand is a volatile currency. Acquisition of foreign assets at the ‘incorrect’ exchange rate could result in the benefits of the underlying foreign investment being lost to the South African investor. We would also caution that currency risk generally not be underestimated and that diversification applies equally to currencies as to most other financial assets.

With the greater proportion of earnings of the Alsi now generated in foreign currency South African investors also have a natural hedge to a weakening currency.

Generating long-term, inflation-beating returns requires that investors move between asset classes. Returns ultimately are a function of the price paid at the time of investing and we believe South African equities will offer value at some point in the future. Until that point we would encourage investors to focus on cash and fixed income investments.

South African investors no doubt recall the rush offshore by our corporates in the mid-2010’s by the likes of Famous Brands, Woolworths, Brait, Truworths and others which are now resulting in write-downs of these “investments”. Had these corporates retained their cash and invested locally, or returned cash to shareholders, this severe destruction of value could have been avoided.

We do hope that individual investors do not make the same mistake.

Reuben Beelders is a portfolio manager at Gryphon Asset Management.