Since 2009, the BEE.conomics survey, conducted by 27Four Investment Managers, has provided an annual analysis of the state of transformation in the local asset management industry.

In its first iteration, the survey identified 14 black-owned firms, representing AUM of just R91bn. The latest edition, conducted to the end of June, covers 51 firms with total AUM of R668bn.

This represents a 15% increase in total AUM from last year’s survey. 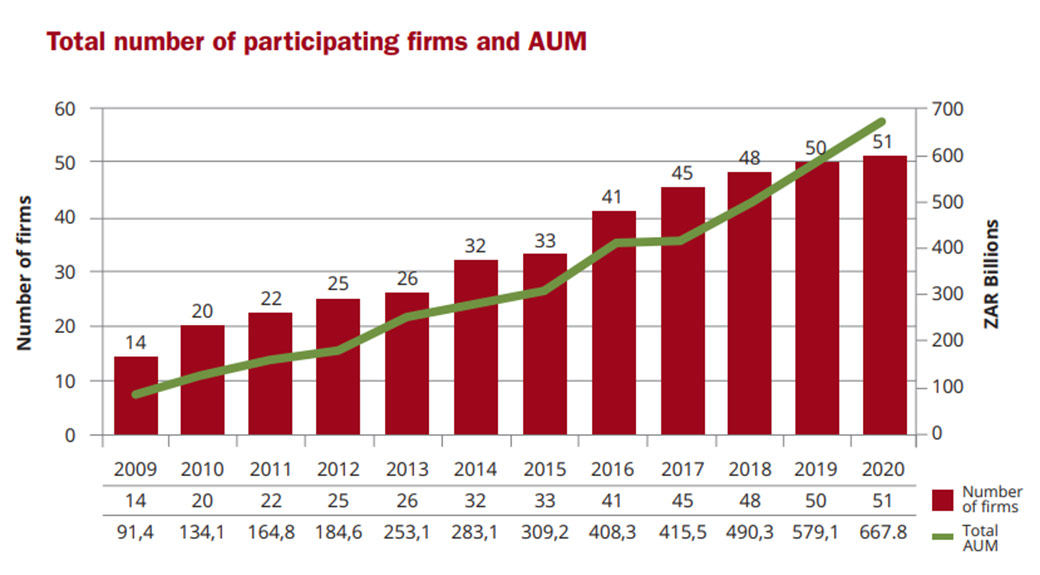 While this increase is positive, Covid-19 has had a definite impact on where it has taken place.

‘This growth has not been widespread,’ said Fatima Vawda, MD at 27four. ‘The risk-off sentiment has really favoured those asset managers with strong fixed income offerings.’

At the other end of the scale, Perpetua Investment Managers experienced a -21.1% decline in AUM over the 12 months.

Overall, the AUM distribution across black-owned firms remains highly uneven. The two largest – Taquanta and Prescient Investment Management – account for 48% of the total.

‘We have a couple of large firms and a long tail of small and mid-sized firms that struggle to break through certain thresholds,’ said Vawda. ‘For managers in the listed space, R15bn seems to be the threshold that they are struggling to break through.’

While the mean AUM across all black-owned asset managers is R13.1bn, the median manager manages assets of just R1.6bn. The graph below shows this concentration in a few large managers. 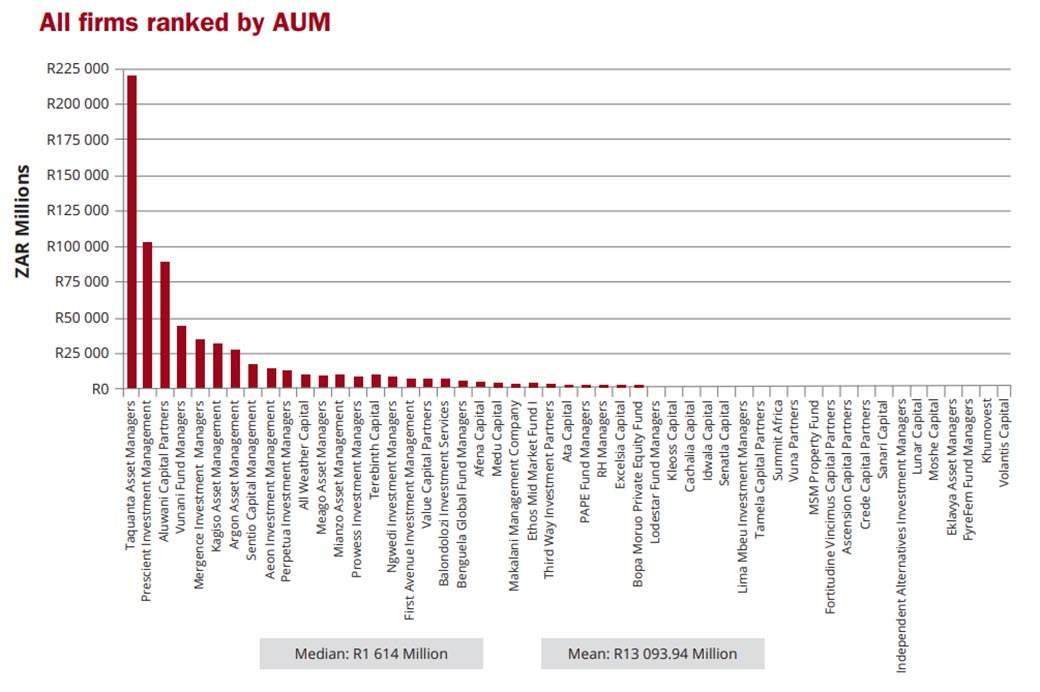 While gains are being made, they remain slow, and, as Vawda pointed out, some significant industry trends are now complicating the growth prospects of black-owned managers further.

‘The biggest threat that managers see, given that 90% of the assets they source is from the retirement fund space, is the consolidation under umbrella fund arrangements,’ said Vawda.

The number of retirement funds in South Africa has decreased dramatically over the past decade as the regulator has looked to rationalise the industry. However, an unintended consequence is the concentration of buying power in a very small number of funds.

‘Retirement funds are a primary source of assets for black-owned asset managers, as the retail industry is highly intermediated with high barriers to entry,’ the BEE.conomics report noted. ‘Public sector and union retirement funds have been supportive of transformation imperatives and were the earliest movers to support black-owned asset managers.

‘However, gaining access to some of the private sector retirement funds has been near impossible due to the intermediation of the “super” umbrella funds, where the majority of assets are concentrated directly in the asset portfolios managed by the sponsors themselves. Umbrella funds are a form of asset gathering for such ”super” funds and diversifying to independent asset managers would dilute their AUM and, by proxy, their income. Hence there is no incentive for them to do so.

‘Couple this with 60% of consultants indicating that they do not consider B-BBEE when recommending service providers to boards of trustees, and increasing the proportion of assets managed by black-owned asset managers is going to be an uphill battle.’

The full BEE.conomics survey can be downloaded here.

Do Western government bonds still have a place in portfolios?

By Patrick Cairns - 20 Oct, 2020 at 03:30
Read More
Most Popular
We use cookies to give you the best experience on our website. You can continue to use the website and we'll assume that you are happy to receive cookies. If you would like to, you can find out more about cookies and managing them at any time here. This site is for Professional Investors only, please read our Risk Disclosure Notice for Citywire’s general investment warnings
We use cookies to improve your experience. By your continued use of this site you accept such use. To change your settings please see our policy.