By its own admission, the returns that PSG Asset Management has delivered in its funds over the last year and a half have been poor.

‘We don’t hide our under-performance,’ said Justin Floor, manager of the PSG Balanced fund. ‘We acknowledge it’s been difficult for our clients. It’s been a disappointing 18 months.’

The PSG Balanced fund and PSG Flexible fund are both in the five worst-performers over the past year in their respective ASISA categories. The PSG Equity fund is in the bottom 10 in its category over this period.

Floor noted that it has been an incredibly difficult market environment for a ‘value-oriented’ manager like PSG for more than a decade. Through most of this period, the firm’s funds have however performed well. Over the past 18 months that has reversed as certain market dynamics have grown particularly acute.

‘Globally, we’ve had the technology effect, where you have a very small number of companies at the top of the S&P 500 that are driving most of the market and have been quite expensive for a while, and continue to find favour.’

The value dispersion between these winners and rest of the market has become extreme in his view.

‘Through many cycles you would expect good companies with good growth prospects to be valued at a higher valuations than slower-growing companies,’ said Floor. ‘But over the last few years the difference between those two categories is the widest it has ever been, and it has kept on getting wider. It has reminded us of what happened in 2000 prior to dotcom bubble.

‘At the same time, cheap or under-valued securities have become even cheaper,’ he added. ‘And being under-valued hasn’t been a protection in a time of market volatility.’

The graph below shows the extent of this split between the performance of the large rand hedges on the JSE and the rest of the market over the past three years. 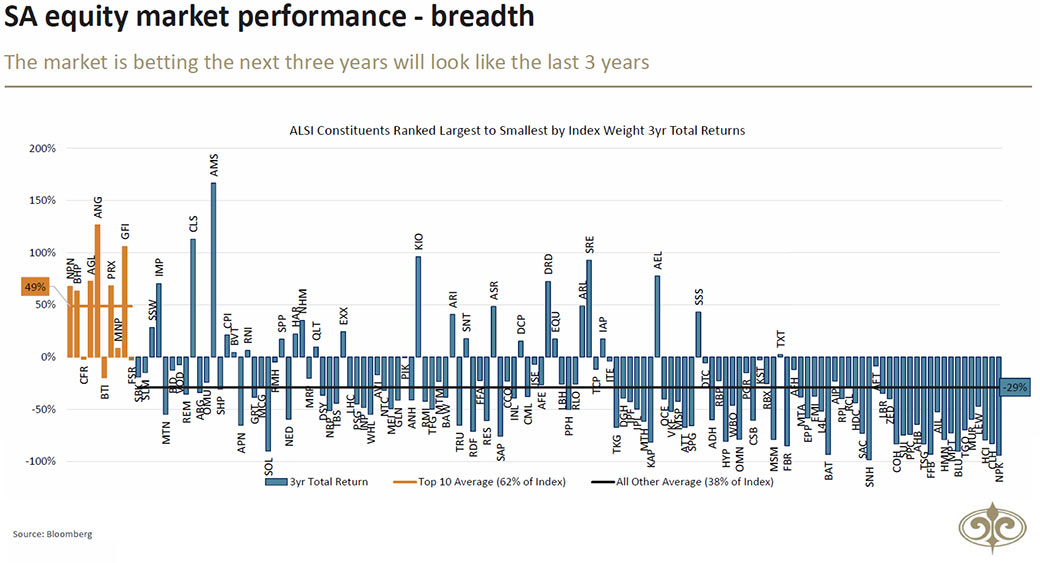 ‘Your mega stocks, which are typically not South African and have largely ex-South Africa investment cases have typically performed very very well,’ said Floor. ‘On average, they have given 50% returns over the last three years. Meanwhile, all the rest, in aggregate, have reduced in value by 30%.’

As PSG has rotated its portfolios away from many larger names into smaller, ‘SA Inc.’ shares over the past two years, this has dramatically hurt performance.

‘We have been early in that trade, clearly. But looking forward, we look at this picture and are incredibly excited because we see a lot of good companies that have under-performed meaningfully and are offering immense value,’ said Floor. ‘We see the prospects for out-sized investment returns over the coming three years.’

Similarly, the shares that PSG holds in the offshore components of its funds have also lagged the market leaders.

‘These are good companies with good growth prospects,’ said Floor. ‘Many of them have been performing well operationally, but they are just not keeping up with the dizzying heights that US tech stocks and some of the market favourites keep on reaching.

Where do bull markets come from?

‘We don’t think this is permanent,’ he added. ‘No trees can grow to the sky. This is a tree that has gotten very high indeed and made investing quite difficult for value-oriented investors like ourselves.

‘We don’t know how long this is going to be sustained, but we think we are much closer to the bottom than the top of this trend.’

This is the sort of environment that contrarian investors like PSG find compelling.

‘It’s also important to realise that no crisis lasts forever,’ said Floor. ‘Marry that with the fact that a lot of stocks have gotten exceptionally cheap, with some of these assets pricing in very, very low expectations for the future, and we think that sets a really interesting foundation for future returns.

‘If you look at all previous bull markets – all of them were born out of low prices and low expectations. Those are the key ingredients one needs for sustained bull markets.’