Emerging markets have not excited many investors in recent years. For the three years to the end of September, the MSCI Emerging Markets Index delivered annualised growth of just 2.4% in dollar terms.

That is against an annualised dollar gain of 7.7% for the MSCI World Index.

However, there is another way to look at this equation. Over the past three years the MSCI South Africa Index is down an annualised -7.6% in US dollars.

This highlights one of the arguments for local investors to have broader emerging market exposure. It is also a longer-term story.

The Coronation Global Emerging Markets Flexible [ZAR] fund has gained 13.2% over the past 10 years according to figures from Morningstar. That compares very favourably against the 9.0% per year achieved by the flagship Coronation Top 20 fund.

As the graph below shows, there was a close correlation in the performance of these two funds until the end of 2018. Since then, however, their fortunes have diverged. 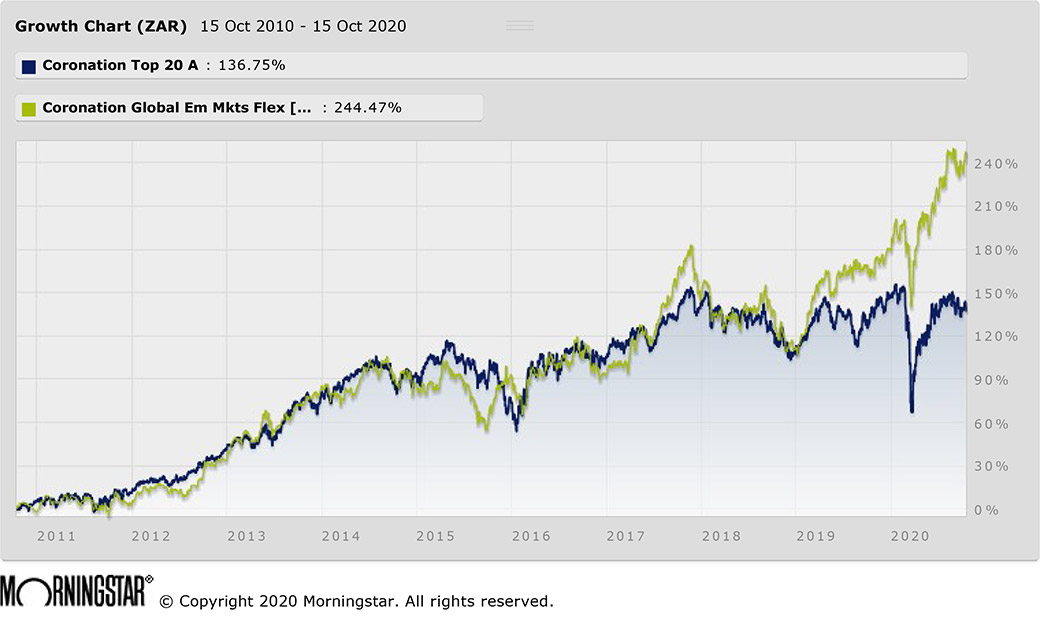 One of the arguments often put forward against South Africans investing in emerging markets is that returns are so highly correlated to the local market that there is no diversification benefit. However, co-manager of the Coronation Global Emerging Markets Flexible [ZAR] fund, Suhail Suleman, questions this belief.

‘When we launched the fund in 2007, it was probably a more relevant argument,’ he said. ‘Today, it’s less relevant for a variety of reasons. And the biggest is that the benchmark universe has changed massively.’

At the end of 2007, Brazil was the largest weight in the MSCI Emerging Markets Index, and the index as a whole was highly skewed towards commodity producers. The likes of Mexico, Russia and South Africa all carried large weights.

‘China was only around 13% of the Index,’ said Suleman. ‘But today it is over 40%. The investible universe has shifted from one that had significant similarities to our market, and in which South Africa was a top five weight, to one where you are now far more exposed to Asia.

‘That region has very different drivers. So a South African investor in an emerging markets fund is not necessarily getting something that is going to be similar to their South Africa exposure.’

This is also the case in terms of currency movements.

‘One of the reasons South African investors invest overseas is because they want some sort of hedge against rand weakness,’ said Suleman. ‘But if the rand sells off, that tends to be the case across commodity-producing emerging market currencies. And that was significant when they were big weights in the index.

‘But today, China, South Korea and Taiwan are collectively 65% of the index. Add India, and that is about three quarters. Those countries have currencies that behave very differently from the rand. That means that investors are getting the rand-hedge exposure they are looking for.’

The significance of these countries to the world economy also cannot be ignored.

‘When South Africans were constrained in what they could invest overseas, it made sense to have all their offshore money in developed markets,’ said Suleman. ‘But now that they we allowed 30% offshore in a pension fund, having it all in developed market exposure makes less sense than it did before.

‘The main reason is that emerging markets are structurally under-represented in developed market indices. If you buy a typical global fund, unless it is massively overweight emerging markets, it will probably have around a 12% exposure.’

That is in-line with the MSCI All Country World Index.

‘But if you look at what emerging markets contribute to world output, to the global population, and to the market value of listed assets, we are talking 30% to 40% or even more by any reasonable long-term metric,’ said Suleman. ‘That’s why I would have direct emerging market exposure to compensate for that.’

The Coronation Global Emerging Markets Flexible [ZAR] fund also allows itself its own form of compensation by permitting exposure of up to 25% in stocks listed in developed markets. These companies must, however, make at least 40% of their revenues and profits in emerging markets.

‘At a time when emerging market opportunity set is looking quite expensive, we will be closer to 25%, and when it is cheaper, we will be lower,’ said Suleman. ‘Today we are around the mid-point of the range. Part of that is because emerging markets have lagged developed markets over the recent period, so the relative attractiveness of the emerging market universe is greater.

‘When we invest in these companies, we look at upside as we would for any stock, and what it brings to the portfolio. When you construct a portfolio, it’s not just putting the stocks that are the cheapest in there, but incorporating a broad range of ideas that can work in a variety of economic circumstances.’