‘A buy and hold strategy,’ said Greville Ward, partner at Fundsmith, ‘does not work if you own rubbish.’

Speaking at the Allan Gray Orbis Offshore Exchange event, Ward noted that by far the most important part of the firm’s famous dictate of ‘Buy good companies – Don’t overpay – Do nothing’, is the first element.

It requires identifying companies that consistently generate returns well above their cost of capital in all economic conditions.

‘A company like Unilever is taking in money at between 6% and 8%, and making a return on capital of 20% to 25%,’ said Ward. ‘Even in 2008, during the financial crisis it was making a return significantly above the cost of capital.

‘And the other great thing about companies like Unilever is that they can take some of that above-average cash flow and invest it back into the business to grow and compound. We know that when we go to sleep at night, Unilever will be a bigger business tomorrow than it is today. It is an appreciating asset.’

Companies that send us money

There is a reason that Ward refers to what companies like Unilever are able to do as a ‘sort of miracle’: there are only a tiny number of listed businesses around the world that can do it.

‘The reason for that is a lot of the best companies in the world are private,’ said Ward. ‘If you are making returns above the cost of capital, if you are growing and compounding that growth, the last thing you want to do in a sense is come to the stock market, because then you are sharing the spoils of war. The stock market is a place companies come to to raise money.

‘We like to invest in companies that send us money, not the other way around.’

And there just aren’t that many of these.

‘We have found, so far, 73 companies that we think are investible,’ said Ward. ‘We have looked at 64,000 listed securities on Bloomberg – every quoted company in the world, and we found 73. We own shares in 29 of those today, because they are hard to find.’

Where are these businesses?

The average return on capital employed (ROCE) for the stocks in the Fundsmith Equity fund portfolio (also accessible in South Africa through the BCI Fundsmith Equity feeder fund) has been between 28% and 31%.since 2013. For the S&P 500 or FTSE 100, the average ROCE in 2019 was 17%.

The companies able to generate these kinds of returns tend to be found in specific areas of the market. The Fundsmith Equity fund has 30% in consumer staples stocks, 23.2% in installed base – software companies, and 11.2% in companies making medical equipment. That is nearly two thirds of the portfolio in just these three sectors.

‘There are plenty of sectors we will never invest in: banks, real estate, insurance, mining, minerals, most big pharmaceutical companies, biotech and telecommunications. These are not sectors in which we can find companies that are producing the sorts of returns we are looking for,’ said Ward.

‘We’ve never said this is the only way up the mountain, or that you can’t make money doing other things. But we believe that if you are investing in those other sectors you have to be a lot more nimble and active.’

The fund is also heavily tilted towards the US market, with 67.7% of the portfolio listed in the US.

‘Again, this is not because of a macro overlay,’ said Ward. ‘We are not taking a big bet on Trump or the election.

‘If you like healthcare and computer products and tech companies, the biggest and best in the world are often head-quartered and listed in the US.’

These are, however, global brands. The companies in the Fundsmith portfolio generate just 47% of their revenue in the US, and 25% in Europe. 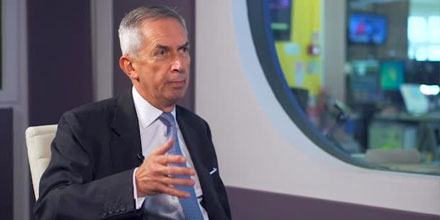 Holding these mega cap stocks means that the manager Terry Smith (pictured) does not feel that the size of the fund has become an impediment to performance, even though it has grown to over $26bn (R420bn).

‘The average market cap of companies in the fund is close to $200bn,’ said Ward. ‘The good news is that you can buy and sell a lot of PepsiCo, Microsoft and Facebook.

‘But we didn’t invest in giant companies because we thought that the fund was going to be giant. We are looking for companies that have been around for a long time, produce above-average cash flows, and grow and compound. If you are a company that does that and are a leader in your field, you are unlikely to be a $2bn company.

‘We think the fund could be three times as large, and we could still deploy the capital as easily.’

The Fundsmith Equity feeder fund has returned 183.8% in rand over the past five years to the end of August, against a category average of 83.7%. It is ranked fifth out of 121 funds in the equity - global peer group.