Over the past 12 months, the average return from funds in the ASISA South Africa real estate general category is -37.4%. Of the 40 unit trusts in this sector with one year track records, 18 are down 40.0% or more over this period.

The recent poor performance in this sector is so severe that there is now just a single local property unit trust showing a positive return over the past five years. That is the True North IP Enhanced Property fund, which has delivered an annualised gain of 0.2% since the middle of 2015.

There is, however, a stark contrast between the top and bottom performers. As the table below shows, this is true over both one and five year periods.

What is also worth noting is that there is also a clear inverse relationship between the most recent 12-month yields on local property funds (calculated to the end of June 2020) and their relative performance.

As the table below shows, over both one and five years, top quartile funds have a much lower average yield than those in the other quartiles.

This suggests quite strongly that funds positioning themselves in higher yielding counters over this period have struggled to maintain performance as the market has shown a preference for quality.

The average 12-month yield of all funds in this sector is 10.5%. Funds in the top quartile of performance for the past year have an average yield that is 30% lower than that.

Most significantly, the True North IP Enhanced Property fund, which is the top-performer in this sector over every time period from one year to five years, has a 12-month yield of just 4.1% - more than 60% lower than the sector average.

The two property funds with five year track records are however in the second quartile of performance over five years. Across both time periods they are in the quartile showing the highest average yield.

To illustrate the inverse relationship between yield and total performance in another way, the chart below shows the 12-month yields of funds in the top-performing quartile of this category over one year. They have been split by quartile.

SA property funds in the top performance quartile over 12 months 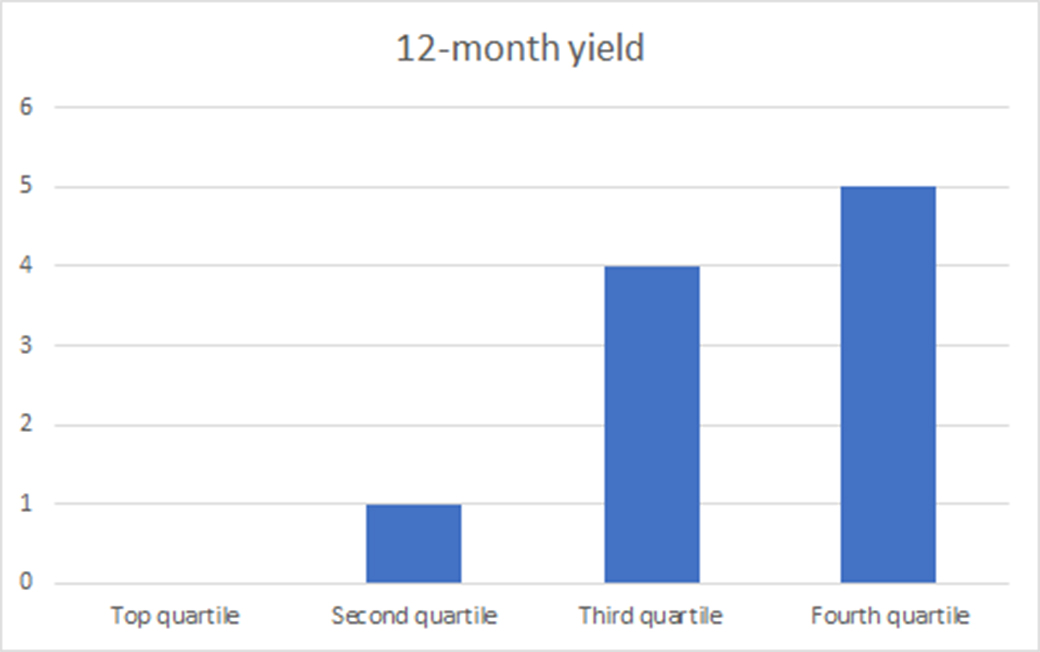 There is not a single fund in the top-quartile of performers that is also in the top quartile in terms of yield. The significant majority (90%) are in the bottom two quartiles.

This remains consistent when looking at five year performance.

SA property funds in the top performance quartile over 5 years 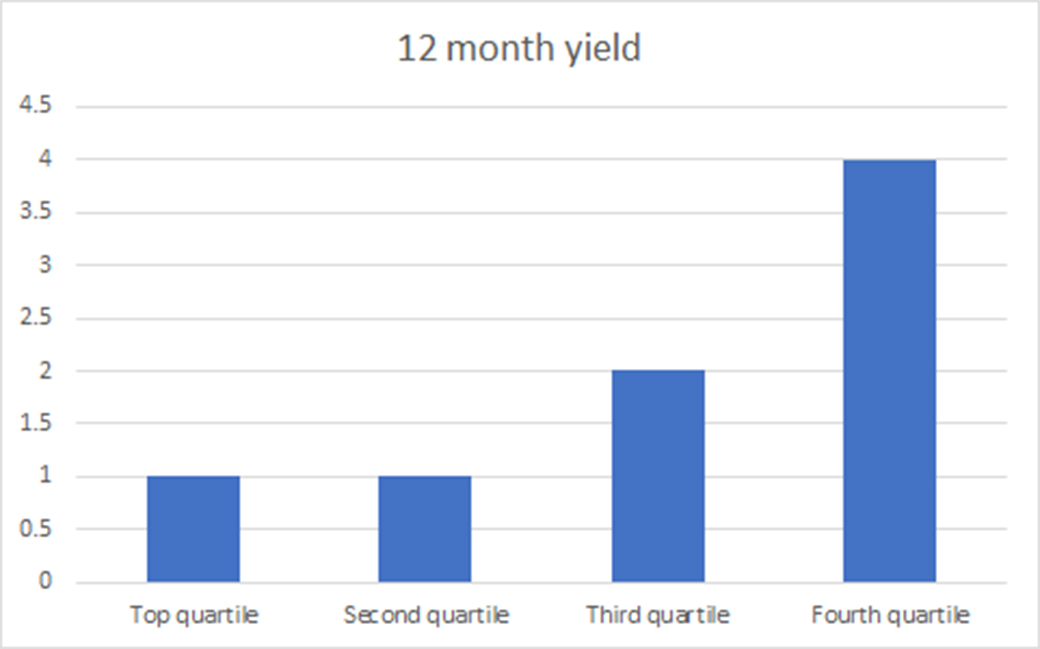 It is worth pointing out that this pattern does not, however reverse perfectly. As the chart below shows, the yields of bottom quartile performers are more varied, although the majority do fall into the top half of funds in terms of 12-month yield.

SA property funds in the bottom performance quartile over 12 months 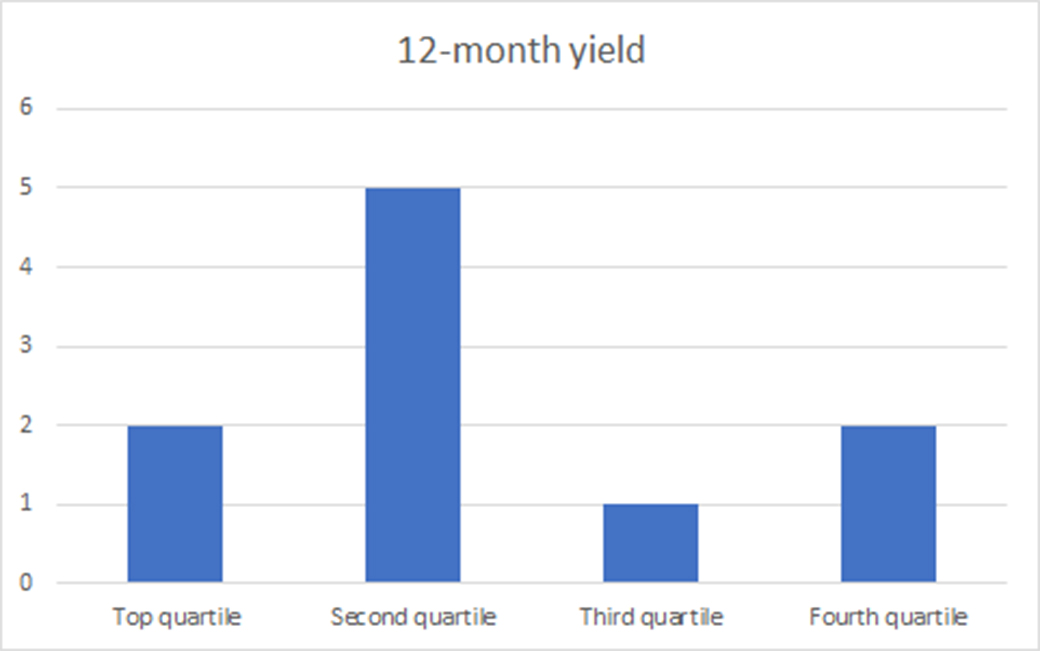 There are two funds in the bottom quartile of performers that are also in the lowest yield quartile.

This looks similar over five years.

SA property funds in the bottom performance quartile over 5 years 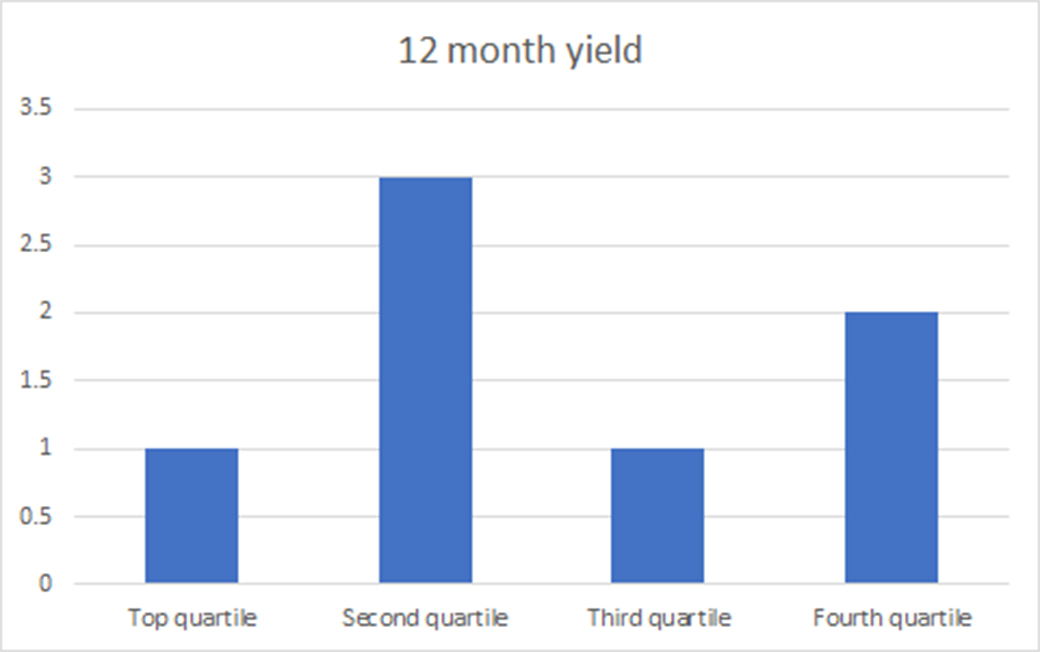 Again, there are two low yielding funds amongst the worst performers.

Most incongruously, the fund with the lowest 12-month yield – the Ci Property fund – is the second worst performer over both the past 12 months and the last five years. It has yielded just 2.5%, and shows a total return over one year of -46.0%, and an annualised return of -13.0% over the past five years.