The unit trust has been managed by Neil Brown and Richard Hasson since its inception in 2001, when it was originally launched as the NIB Growth fund. It was adopted into the Nedgroup Investments stable in 2003.

Brown and Hasson founded Electus Fund Managers in 2007 within the Old Mutual Investment Group, and the fund has been managed within that firm ever since. In 2015, Electus became fully independent and 100% owned by staff.

In March of this year Electus however announced that it was closing ‘due to the decline in Electus’ AUM and the subsequent financial pressure on the Electus business’. Brown and Hasson will also be stepping away from the asset management industry.

Electus closed its hedge fund at the end of March 2020, and returned cash to investors. It will be closing all other client portfolios at the end of June, and returning that capital to clients as well.

The Nedgroup Investments Growth fund will not, however, be affected as Laurium will take over responsibility for its management.

While Laurium noted that it was excited to partner with Nedgroup Investments, the firm is taking on a meaningful challenge. The unit trust’s performance has been under pressure as Electus had always specialised in identifying opportunities in mid- and small-cap shares. The recent dramatic under-performance of these sectors had however affected this strategy.

The Nedgroup Investments Growth fund had out-performed its category average since inception to 31 December 2018, and was a top-quartile performer for the one and three year periods to the end of 2018. However, performance over the past 18 months has been poor.

As the chart below shows, its long-term track record is now well below both the category average and the FTSE/JSE All Share Index (Alsi). Over the past five years, it is down -28%, while the Alsi is up 21%. 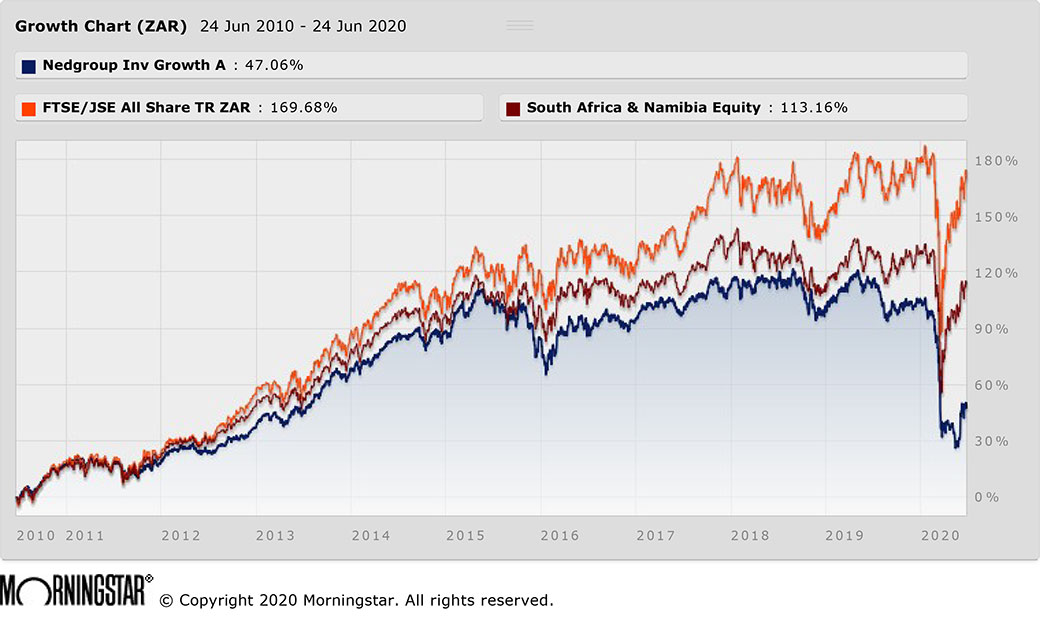 The fund has also experienced a sharp fall in AUM. At the end of 2016, it had R1.2bn under management, but that has almost halved to R636m.

Laurium noted that the fund will reflect its house equity view, with Murray Winckler and Dwayne Dippenaar (picured above) taking lead portfolio management roles. The firm already has its own fund in the ASISA South Africa equity general category – the Laurium Equity Prescient fund – but at least for the time being the two unit trusts will continue to be run as separate portfolios.

‘At this point the funds are relatively different,’ said Dippenaar. ‘There are some smaller counters in the Electus fund that we think are very interesting and could add to the Laurium funds, and visa-versa.

‘The fundamental philosophy we use and our process will however be exactly the same for both,’ he added.

Dippenaar said that Laurium has already engaged extensively with Electus analysed all of the positions within the Nedgroup Investments Growth fund. This is both to understand the investment case behind every company and to ensure the smoothest possible management of the transition.

‘First and foremost in our minds is the end client,’ said Dippenaar. ‘There will be a period of transition, but we will manage that very cautiously and apply our minds to the underlying investment theses of the stocks. Some of those are very interesting.

‘Many small caps have been under pressure because the market is worried about South African-exposed companies. But there are many stocks that have been unduly sold down and some really interesting investment opportunities there,’ he added.

Rob Johnson, head of investments – best of breed at Nedgroup Investments, said that the firm had engaged extensively with Laurium and was ‘pleased to get them on board’.

‘We think they have a unique view, and the way they have gone about investigating the portfolio is really thorough,’ said Johnson. ‘They are also 100% employee-owned, so their success and their culture is very much aligned with the end investor.’

Editor's pick: The team behind the Aylett Equity Prescient fund

By Patrick Cairns - 09 Jul, 2020 at 01:30
Read More
Most Popular
We use cookies to give you the best experience on our website. You can continue to use the website and we'll assume that you are happy to receive cookies. If you would like to, you can find out more about cookies and managing them at any time here. This site is for Professional Investors only, please read our Risk Disclosure Notice for Citywire’s general investment warnings
We use cookies to improve your experience. By your continued use of this site you accept such use. To change your settings please see our policy.