While US equity market returns have been impressive (and volatile), these moves come after a first quarter that saw the emergence of the Covid-19 pandemic in the US and its devastating impact on the US and global economies. As the first half of the year came to an end, the number of COVID-19 cases, especially in the US, continued to rise, triggering a considerable amount of uncertainty in markets.

In South Africa, the JSE posted impressive gains in June despite some hiccups along the way. Miners, especially gold miners, Prosus and Naspers did most of the heavy lifting. The FTSE/JSE All Share Index jumped 7.7% for the month. 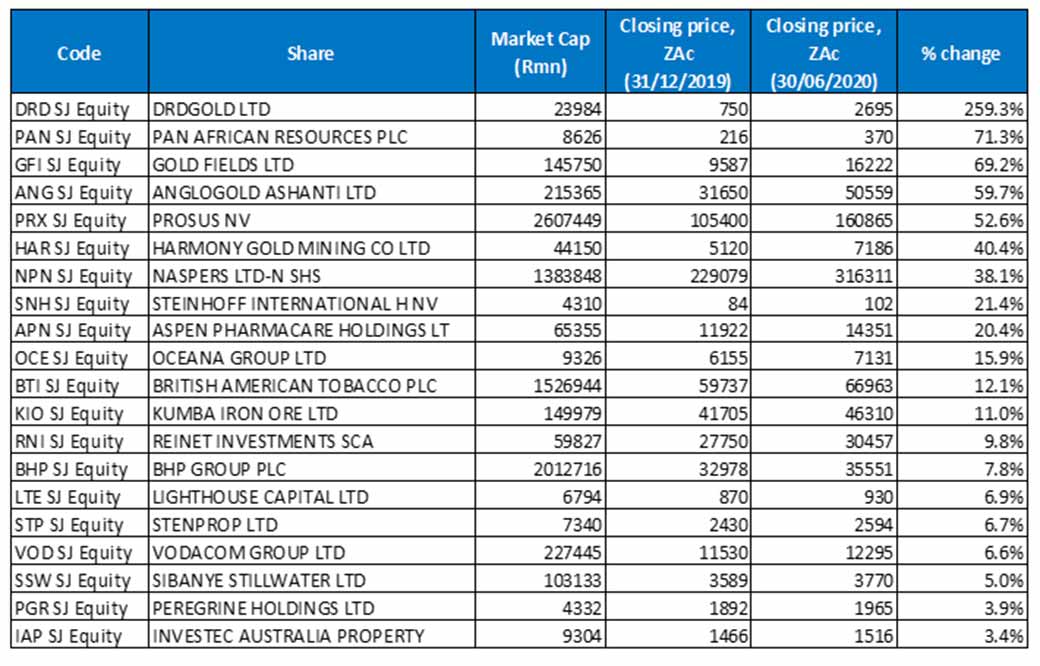 Fourteen of the shares that were best-performing for the year to the end of May remained among the 20 best performers for the year to the end of June. Oceana Group, Lighthouse Capital, Stenprop, Sibanye Stillwater, Peregrine Holdings and Investec Australia Property were June’s new entrants in the top-20, bumping Textainer, Sirius Real Estate, African Rainbow Minerals, Mondi Plc., JSE Ltd., and RFG Holdings from the year’s top-performers list.

DRD Gold remained the best-performing share for 2020 (for the fourth month running), with an impressive 259.3% share price gain to end June. With gold experiencing a rally this year and trading recently at its highest levels in about eight years, the DRD share price jumped by 52.3% in June alone, as nervous investors continue to seek out so-called safe-haven assets amid the pandemic.

Local gold miners are also benefiting from a weaker local currency, as they earn their income in US dollars, while paying expenses in rand. As was the case in May, DRD Gold was followed by Pan African Resources, Gold Fields and AngloGold Ashanti.

Prosus, which has been spurred along by growth in online gaming during the various lockdown periods and its investment in Chinese gaming juggernaut Tencent, took fifth spot, after gaining a further 12.9% in June. 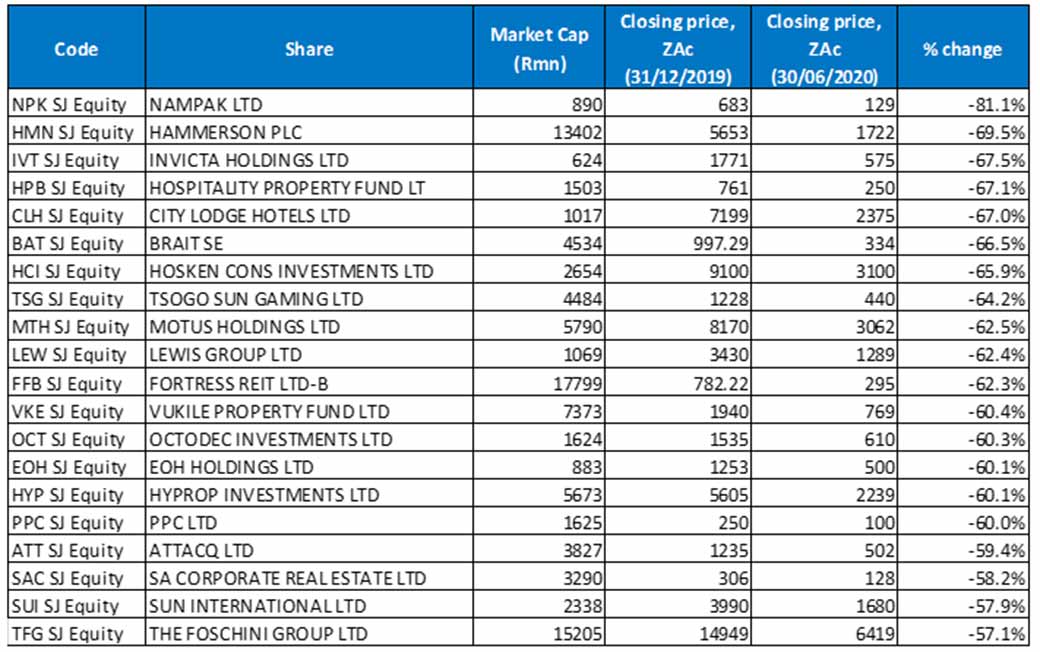 Looking at the year to end-June’s worst performing shares, five new counters entered the arena. Hospitality Property Fund, Lewis Group, Octodec, Attacq and The Foschini Group , replaced Intu Properties (its shares have been suspended on the Johannesburg and London stock exchanges as it goes under administration), Redefine, Sasol, Arrowhead and EPP.

While Nampak recorded a 12.2% share price gain in June, this was not enough to pull it out of the worst-performing shares for the year-to-date category. Indeed, the counter maintained its position as the worst performer in 2020 for a second consecutive month, with the share price now down 81.1% since the start of the year.

Nampak was followed by UK and Europe shopping centre owner, Hammersons Plc and Invicta Holdings. Last month, Hammerson announced the resignation of its board chair David Tyler. This comes a few weeks after its CEO, David Atkins said he would step down. In May, the Group’s sale of nine retail parks to Orion European Real Estate for about R9bn fell through.

Invicta was followed by Hospitality Property Fund City Lodge Hotels, Brait SE and HCI. In a June operational update, City Lodge said it now has enough liquidity to get it through the pandemic after lenders extended its facilities and waived borrowing covenants for the June and December measurement periods.

Meanwhile, Brait gained 28.0% in June after the investment group announced the sale of its 63.1% stake in Iceland Foods for about R2.45bn. The proceeds will be used to repay debt.