For three of the last four weeks, foreigners have been net buyers of South African bonds, according to the JSE’s weekly statistics.

While foreigners have still been significant net sellers of local bonds for the year to date, there has been some meaningful activity this month. In the first week of November alone, foreigners were net buyers of R11.3bn on the local bond market.

While the US election and the news of Covid-19 vaccines has shifted risk dynamics, the head of fixed income at Ashburton Investments, Albert Botha (pictured), noted there are reasons to expect this interest should be sustained.

The first reason for this is the economic outlook in the developed world, where interest rates have been suppressed.

‘The intervention of central banks and the fiscus means rates are likely to remain very low for very long,’ said Botha, who co-manages the Ashburton Stable Income fund and Ashburton Diversified Income fund. ‘We’ve already heard the US Federal Reserve System committing to low rates for a while.’

In addition, the increased debt levels across the world will lead to lower growth, and demographics across developed markets will contribute to both lower growth and lower inflation.

In South Africa, inflation is also likely to remain relatively benign. Ashburton is projecting inflation to average around 3% for the rest of the year, and to be below 4% by the end of next year.

‘We also expect surprises from the downside – a stronger currency, a weaker oil price, and lower or no increases in big expenses such as rent and medical aid,’ said Botha. ‘That, combined with a difficult demand environment in South Africa, could lead to a lower inflation outlook.’

With this as the backdrop, the real yield gap between South African bond yields and those in the US is at extreme levels.

The chart below shows the real yield gap between South African 10 year bonds, and US 10 year Treasury inflation-protected securities (Tips). 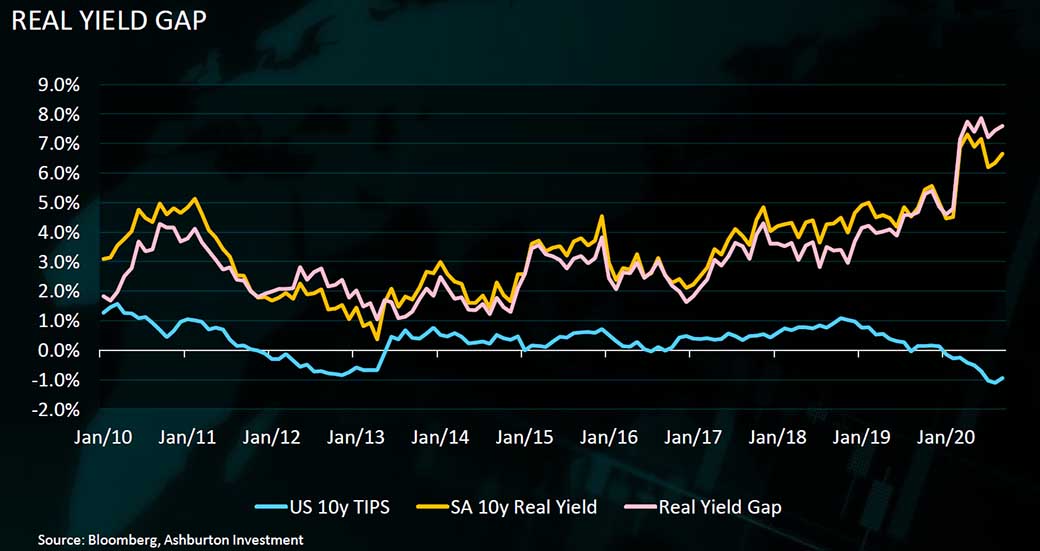 He added that regardless of the country’s debt picture, it is offering an attractive alternative to what investors an access in developed markets. This will bring foreigners back to the local market.

‘But earning an 8% or 7% real yield compared to what you can earn in the US is attractive. It’s likely that, as the risk environment improves, we will see more investors coming to South Africa.’