There are a number of headline numbers that are making many US equity investors uneasy.

One is the Shiller cyclically-adjusted PE ratio on the S&P 500, which is currently at 31.9 times. That is higher than the level it reached on Black Tuesday in October 1929, the start of the market collapse in the Great Depression.

Another is the multiple on the Nasdaq 100 relative the S&P 500. This is now above the levels it reached at the height of the dotcom bubble.

A number of investors look at these figures and see a market in bubble territory. However, the CIO at Credo Wealth, Deon Gouws, is more sanguine.

Gouws points out that in 1999 and 2000, it took 807 days for the multiple on the Nasdaq relative to the S&P 500 to stretch to record highs. That was slightly more than two years. In the current market, it has taken 6,501 days, or 17 years, for the same re-rating to take place.

‘Not only that, but the largest companies in the world that dominate the Nasdaq today are strong, healthy companies, that are making substantial profits,’ said Gouws. ‘I would therefore suggest that there is not a bubble as such. There may be a bubble in specific stocks, but, on aggregate, I would not call a bubble for the Nasdaq.’

In addition, he pointed out that the share prices of more than half of the constituents in the Dow Jones Industrial Average are actually down for the year-to-date.

‘Some tech shares have done tremendously well, and we can debate the reasons for that,’ said Gouws. ‘But there is hardly a bubble in the market when more than half the Dow is still in negative territory for the year.’

He added that just because a market has performed strongly does not necessarily indicate that a return to the mean is inevitable. On the contrary, the opposite has been more likely in the past.

Gouws noted that since its low point in March, the S&P 500 gained more than 50% to the middle of August. That the highest 100-day gain on record.

Historically, however, similar strong short-term gains have generally not preceded a pull-back. 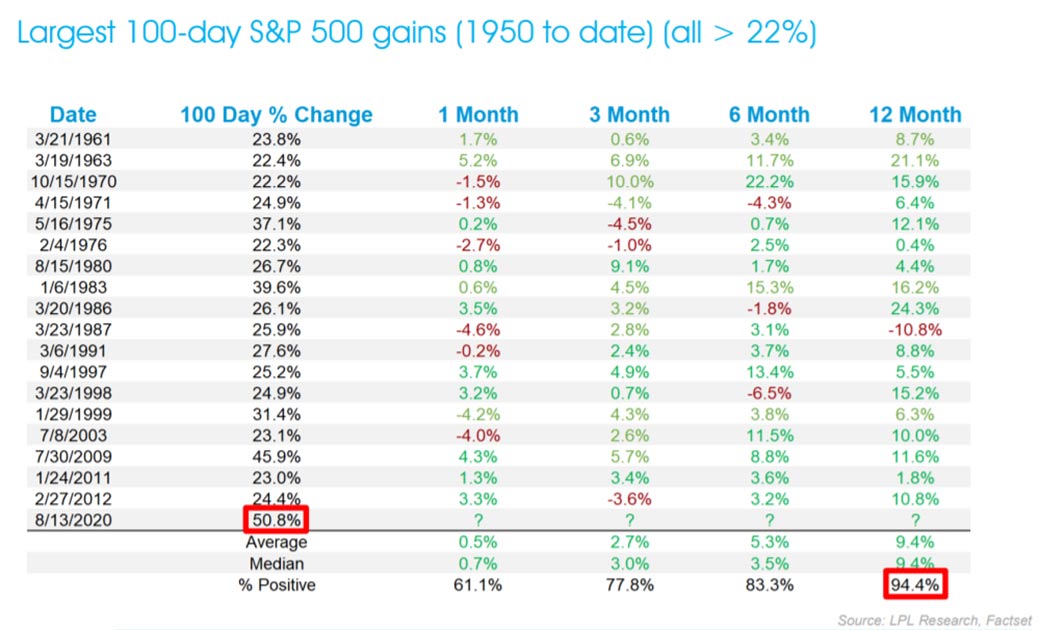 ‘In 94% of observations, which is all the years we looked at bar one, the year after this strong market gain, the market was up even further,’ said Gouws. ‘Strong markets are a precursor to even stronger markets. That is mostly what we have seen in history.’

He is also less worried than many commentators about the apparent mismatch between this strong market performance and the state of the broader economy. Rather, be believes that the market over-corrected to the downside and the recovery is reflecting this.

Gouws pointed out that many earnings updates for S&P 500 companies had been downgraded in the pandemic. In the second quarter of this year, however, 83% of companies in the index beat their quarterly earnings expectations. This is the highest level on record.

‘With 83% of companies out-performing expectations, you should expect upside in share prices,’ Gouws said.

This has continued into the third quarter.

‘There are more companies still showing earnings expectations going up, and the quantum they are going up is a lot more than those going down,’ said Gouws. ‘On balance, this explains why the market has been stronger than many people expected.’