Before Covid-19 hit, the average term to maturity in the Northstar SCI Income fund was five years. As the impact of the pandemic unfolded, however, coupled with escalating fiscal risk, portfolio manager Mark Seymour started reducing the term risk in the fund by selling longer-dated bonds and getting closer to the front end of the curve, both for ILBs and fixed-rate bonds.

‘Concerns about South Africa’s fiscal strength are on everyone’s minds,’ said Seymour. ‘Although the government has been relatively well contained in terms of overall escalation of expenses, the economy has not been able to keep up.’

Finance minister Tito Mboweni recently said the reduction in economic activity in the second quarter has flowed through to lower tax revenue, especially in the main tax instruments of personal income tax and VAT, exacerbating the precarious fiscal position. The minister said the economy is likely to contract by more than the 7% previously forecast by the Treasury, and tax revenue is expected to fall by a greater proportion than the contraction in GDP.

‘The expected shortfall of more than R300bn, around 6.2% of GDP, means the country will have to borrow more money,’ said Mboweni. ‘Failure to contain our ballooning debt and debt service costs, and narrow the budget deficit, will damage the long-term economic prospects.’

Seymour said that, although he is an optimist, South Africa is currently facing some ‘really serious headwinds’. This combination of factors has made Northstar less inclined to loan money to the government over a 20- to 30-year basis.

Seymour has therefore been shortening the duration on the portfolio to manage the term risk.

‘We believe credit risk is going to escalate so we have chosen to try and get to the front of the queue where possible by holding senior bonds,’ he said. ‘We recognise that banks themselves are under ever-increasing risk, largely as a function of the environment and low-interest rates.’

He added that he has started selling the long end of the curve to buy ILBs at the front of the curve.

‘Even on real yields of 1%, this is not a bad place to be parked currently. People will see that our ILB exposure is escalating, but the point is that we are bringing down the term risk. Our exposure now on ILBs is around 65% and that is mostly short-term bonds of 3.5 years and less,’ he said. 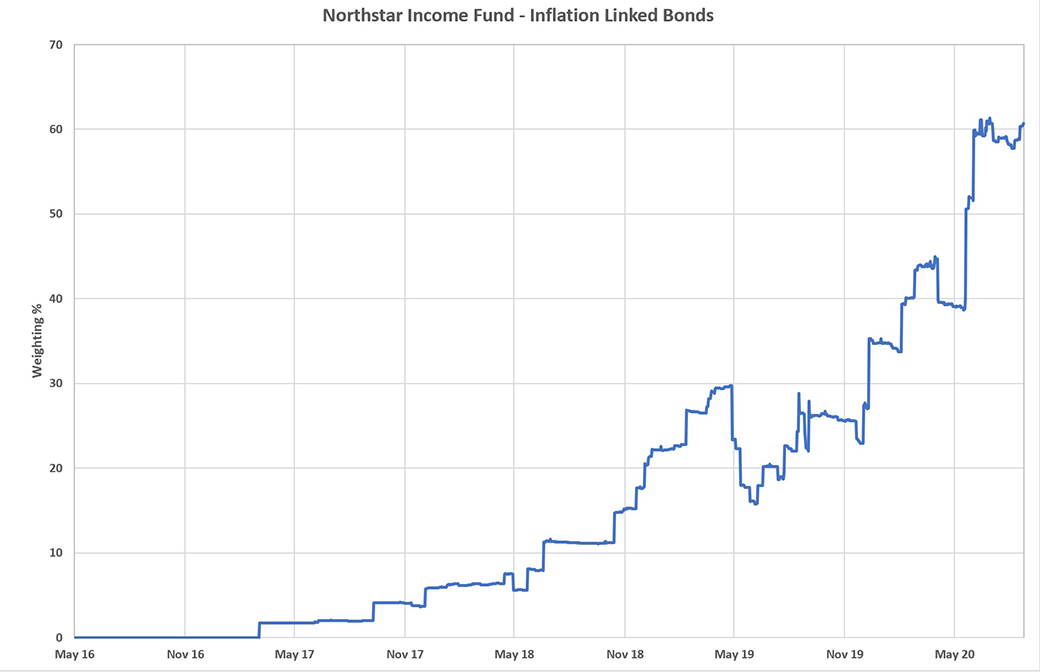 The bulk of the fund’s ILB exposure is sitting in the R212, R197 and the I2025 bonds. Looking at where the yields are trading now, Seymour said if you have an expectation that inflation might average just over 4% over the next couple of years, then the nominal return from those bonds would be roughly 6%.

‘We think that’s an extremely attractive yield, particularly when the repo rate is sitting at 3.5%,’ said Seymour. ‘Obviously, there are risks. You could have inflation coming in at 3%, and then it becomes more of an even playing field between ILBs and fixed bonds.

‘At the moment, we still see the front-end of the inflation curve as the more attractive option, even though ILBs have rallied aggressively in the past couple of weeks.’

While Northstar does not formulate strong views on the inflation and interest rate outlook, management does review commentary from the major banks and then positions the portfolio given the consensus view.

‘Currently, the market consensus is that we are at the bottom or close to the bottom of the interest rate cycle, but we are not expecting a dramatic change in interest rates,’ said Seymour. ‘Secondly, the one-year outlook on average inflation is hovering around 3.8%.

‘If you look at our models, we have a fan of outcomes ranging from a best-case scenario of 3% to a middle range of 4.5%, with 6% at the upper end. If we stack those numbers up, the front end of the inflation curve is very attractive. Fixed bonds only look attractive in the long end, but we are shying away from this as we are reluctant to take on any more term risk.’

If there are interest rate hikes and ILBs continue their current performance, the fund’s next headache will be figuring out what to do with its ILB holdings.

‘We’ve had a perfect storm where ILBs have been very attractive, but in the last couple of weeks, those assets have rallied quite hard,’ said Seymour. ‘For fixed income investors, it is becoming more difficult to identify where the next opportunity lies.’